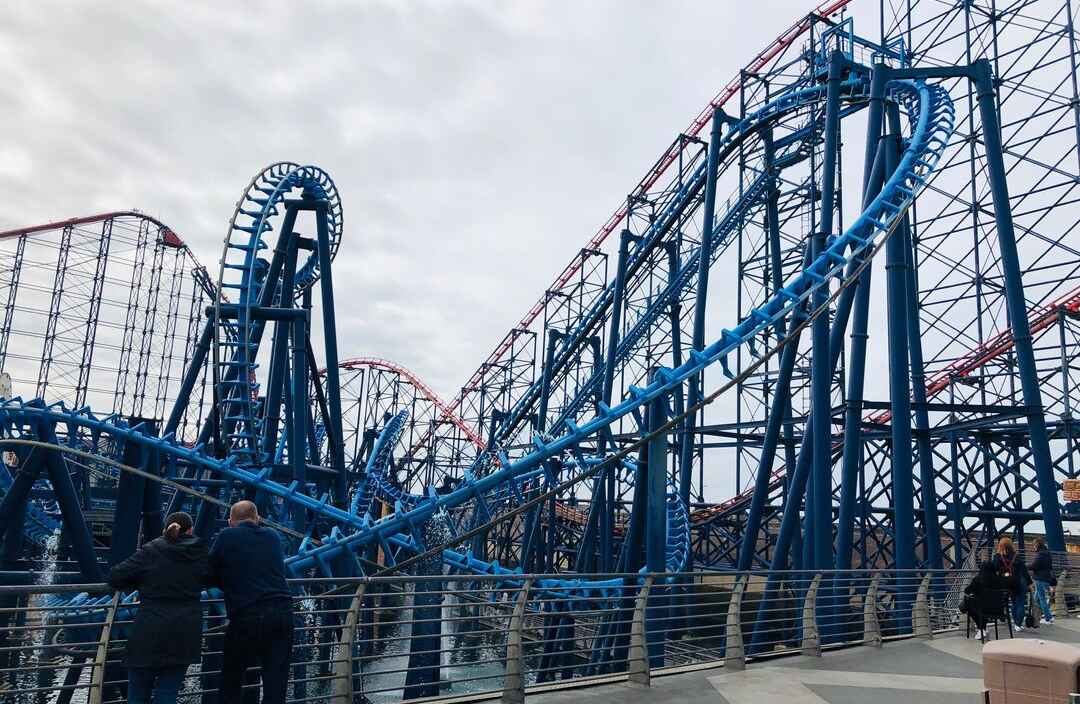 We visited Blackpool Pleasure Beach on a warm but cloudy day, mid week in September as part of our 5 day Blackpool Adventure with Resort Pass Plus. This is one of the older amusements parks in the UK, founded in 1896, yet despite this brings in over 5 million visitors a year and has been voted among the top parks in the UK – and even in Europe. With a record number of rollercoasters, it offers a lot to adrenaline junkies and those coasters often push out records for height, speed, inversions and more. The newest rollercoaster, Icon is the first coaster in the UK which features a double launch and cost a whopping £16.25 million to build so my husband was super keen to get on it!

I was gifted three Resort Pass Plus tickets and this meant I had free entry into Blackpool Pleasure Beach. I was not otherwise compensated for this trip or review.

But it’s not all about those coasters. We visited with a toddler (2 years 5 months) and enjoyed the famous Nickelodeon Land. This takes well known characters from the Nickelodeon franchise and turns them into rides, including The Rugrats, Spongebob Squarepants, Dora the Explorer and more.

Visiting midweek off season means the park is quite quiet, which is exactly what we wanted. This year we’ve visited quite a few large theme parks with our toddler, including most recently Chessington World of Adventures and Drayton Manor Theme Park and the worst part of any theme park has to be the queues. In Drayton Manor, my husband queued over 2 hours at one point for a rollercoaster and we swore after that we’d be very careful about visiting at quieter times whilst we still could. Having a pre-schooler means you can make the most of term time and really cut queue times down so I highly recommend an off peak visit when possible.

In Blackpool Pleasure Beach we walked onto almost every ride. The biggest roller-coasters were only a 5-10 minute queue at maximum, which meant we could go on every ride in the park that was open and still have half the day left to do our favourites again! Blackpool Pleasure Beach doesn’t offer any sort of “parent swap” system like some parks do, so if you have a toddler and both want to go on the adult rides, you’ll both have to queue separately. My husband declared Icon his favourite coaster in the UK so far, which is a pretty high accolade from him – but he also complained that some of the wooden coasters were very uncomfortable (Grand National he described as very painful) and showing their age. The Big One, unfortunately, was closed, which was a disappointment. A compact park, there’s not too much walking and this helps save a lot of time too. On the whole we really felt we packed in a lot for our time spent here.

Nickelodeon Land is perfect for a toddler. There were a lot of rides that toddlers could go on when accompanied by an adult, both in this section and in the main park as well. William even went on the haunted house with daddy and jumped a few times, but enjoyed it. We all went on the Wallace and Gromit ride as a family, which takes you through scenes based on the TV show. Unfortunately the Alice in Wonderland family ride was closed, as were about 4 rides in Nickelodeon Land. This did represent quite a significant percentage that were closed, and this leads on to my next point – the age of the park.

This is an old traditional park and despite a lot of investment, does show its age. The majority of the rides, especially the family rides are in desperate need of improvement, both in the scenery and the comfort of the ride. The structure is certainly sound and the design for many family rides is still today as it was 50 years ago, but scenery is fading, things weren’t working, seats were faded and upholstery worn and ripped. The Alice in Wonderland ride was closed whilst we were about to get on it as the “lights keep tripping so there’s an electrical fault somewhere”. A bored looking engineer rode round and round and round trying to figure out the fault (poor guy, fun for a family, not so fun for your day job!) We asked the staff member if it would be open later and he said he didn’t know, and that there were often problems on Wednesdays off season as the park is closed Monday and Tuesday.

So that explains some of the problems we encountered; as the park is closed for two days and we entered at opening on Wednesday morning, a lot of rides had just been turned on. Two days of sitting there unused meant there were faults that had to be diagnosed and sorted out. Safety first for sure, but perhaps more maintenance is needed, or the rides should be turned on a few hours before the park opens.

In addition to this, a lot of space is given over to amusement arcades, of which Blackpool already has plenty. These had the same tired old machines as the rest of the arcades out there, designed to empty the last few pennies from your pockets. The roof in one was leaking and the floor was soaking wet and in a few things my toddler inserted his £1 spending money, nothing happened, as quite a few machines seemed broken. Get rid of the majority of these amusements and use the space for something else in my opinion. In Nickelodeon Land we braved the Rugrats Log Flume and got absolutely drenched. We popped two pound coins into the big air dryer to dry us off and nothing happened. We told a staff member and were told someone would be around “within an hour” to look at it, so we had to abandon our money and our hopes of getting dry. Take a change of clothes; it’s a very small log flume but gets you absolutely soaking!

Despite a lot of the park looking tired, it’s clear there is investment here in the newer rollercoasters and that is going to continue to bring hordes of people to the park. I just hope they think about the families too and put some work into revamping the family attractions and features.

For those with young families, I’m a little less enthused but would still visit again, with a few tempered expectations. Although the rides are plentiful and we walked on all that were open, the amount of things that were shut down or simply broken was both frustrating and a little worrying. Perhaps we visited on a particularly unlucky day and I’m open minded about trying again as we’ll definitely be back to Blackpool in the future, so I’m sure this won’t be our last visit.

Overall we had a good day out here, make some lovely memories together as a family and would definitely visit again next time I’m in Blackpool. I’d bring a change of clothes for the water rides though! 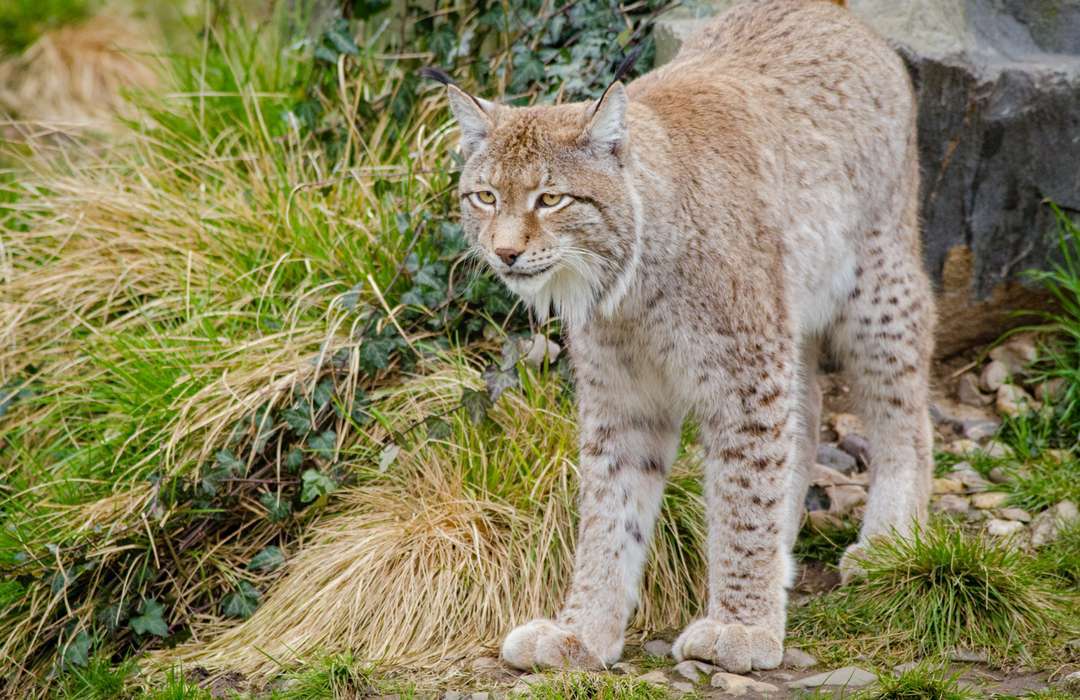 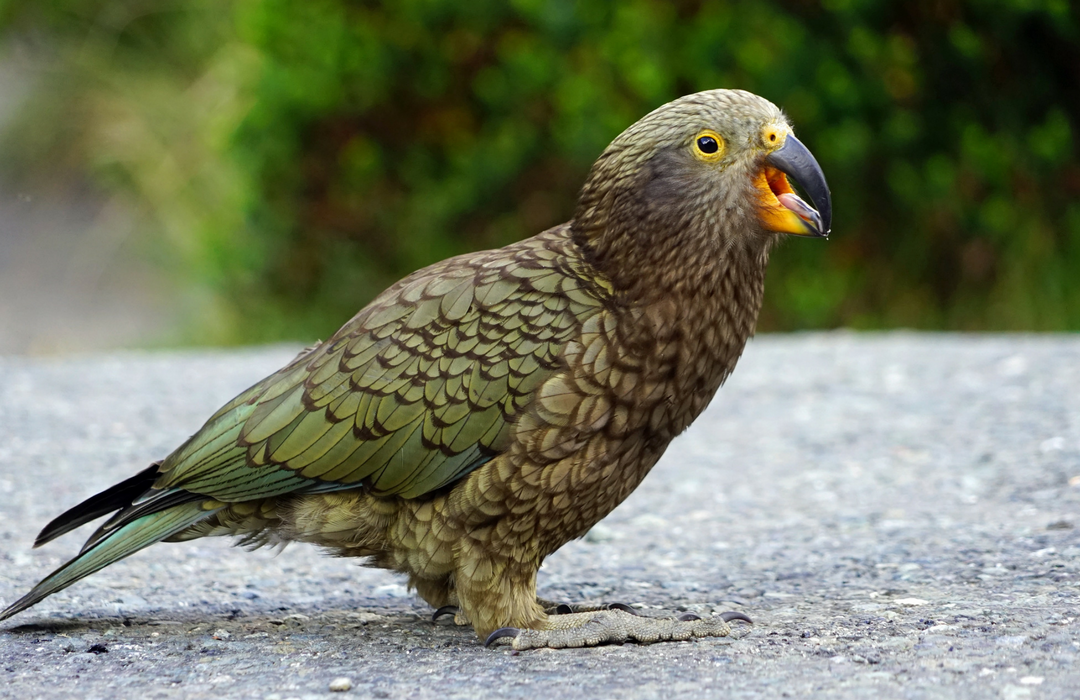 A Birthday Day Out at Bristol Zoo 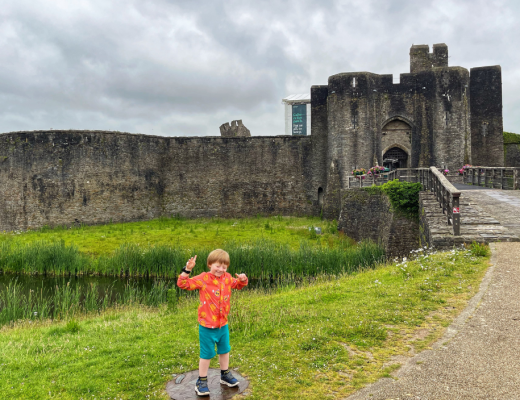