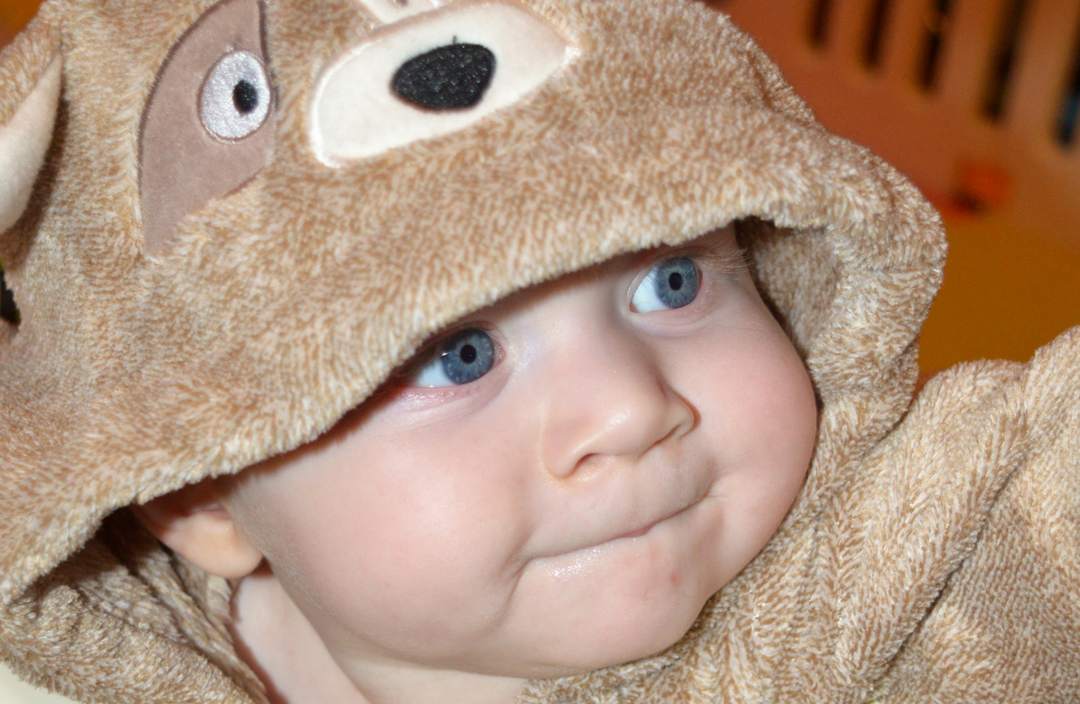 I’m a little late on this as William is actually 9.5 months now, sorry!

Baby led weaning has been going on for about 3 months now. We started at 6.5 months. It couldn’t be easier to be honest – we really lucked out here. If it’s food and it’s on the tray it’s going in his mouth. He chews and swallows almost everything and I no longer have to make any special food for him at all. He will literally eat anything we are eating – even spicy food, mexican food, curries, all his vegetables, fruit, all meat, anything!

For breakfast he currently has weetabix made with formula milk (we will switch to whole milk at 12 months) and half a banana or other piece of fruit. For lunch he usually has beans on toast, a tuna, egg or cheese sandwich and some fruit. For dinner it’s whatever we’re eating! His favourites are sausage stir fry, tuna pasta bake, chilli con carne, chicken tikka or chicken korma and he loves carrots and sweetcorn the most out of vegetables. 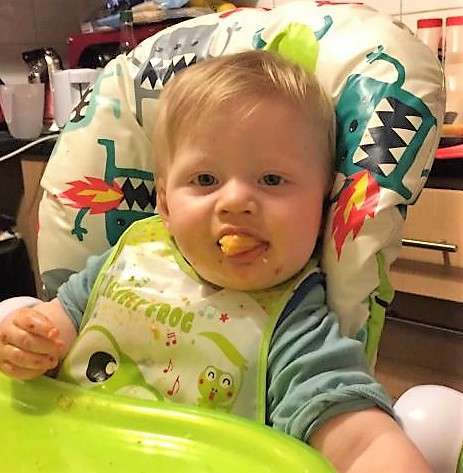 He still makes a massive mess and we often end up with food everywhere, including in his hair, but a lot more food is going down now and very little ends up in his bib. He has however learned the trick of feeding the dog, who is going to get fat at this rate.

We have moved forward in crazy leaps and bounds not just from 6 to 9 months – but even from 8 to 9 months. At 8 months old he was sitting up unaided but his crawling needed some work. He was still just dragging himself forward inch by inch without using his legs at all, just slithering along like a snake, but with none of the grace! Then one day he figured out he could get up on his knees. He spent the day rocking back and forth, not moving. The next day he realized he could easily pull himself up from this position to standing. Within a few weeks he was cruising around his pen and the house as long as he can hold onto something! He still doesn’t really crawl unless he’s desperate to reach something, but boy does he love standing up.

Now he can stand up and sit down at will as long as there’s something to hold onto. He’s had a few tumbles backwards but the floor of his play pen is well padded so he has a mini-meltdown for 2 minutes and then forgets what happened and is back as it.

He is a happy baby, but very very stubborn and has mini tantrums and meltdowns when something is happening he doesn’t like – like being strapped into the pushchair too long, having his nappy changed or being put down for a nap. His current favourite thing is swimming. We’ve been taking him to the pool since he was 6 weeks old, but it’s only really in the last month that he’s started kicking his legs and splashing his arms. He finds it hilarious when he splashes water in our faces now – but doesn’t feel the same when it’s done to him!

He has started going to a local playgroup and finds other children fascinating, although most of the children are older than him and he’s been crying when they walk up to him and touch the toys he had decided were his, so that’s been a bit of a new experience for him – learning to share and that not every shiny thing in the world belongs entirely to him.

He loves going outside but hates being strapped into his pram. Luckily we’ve been testing the Kiddy UK Adventure Pack – review to come on that later, and he absolutely loves playing King of the World behind us! 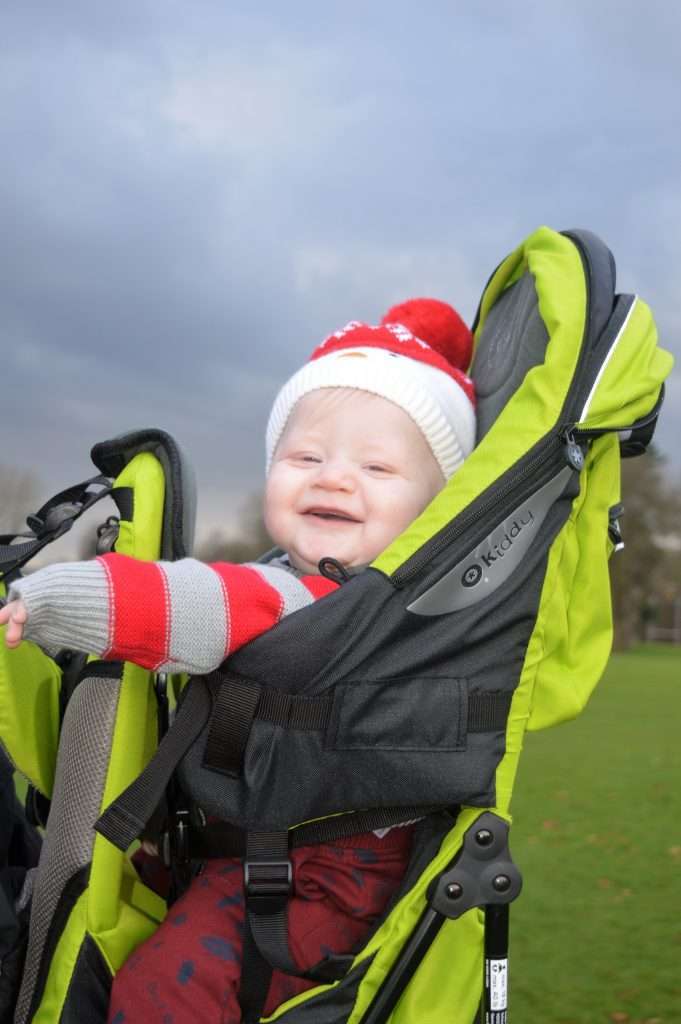 He is still in our bedroom as we live in a 1 bedroom apartment. We moved the cot to the lowest position as he was standing up, which hasn’t affected him, but makes him a little bit harder to get in and out of. At the moment he still needs to be cuddled to sleep, which can take up to an hour. Although all the professionals tell us to leave him to cry if we can – I simply can’t. It triggers my post natal post traumatic stress disorder and I end up sobbing with him. It’s just no good for my mental health, so we have a method that works for us. We keep to the same schedule every night, but have him in our bed for a story and then a cuddle. Currently daddy handles this, as he still cries when he realizes it’s bed time and I find it very distressing. Once he’s down he usually sleeps from 8pm to 6am. Sometimes he wakes up a little earlier, or once in the night, but can be soothed back to sleep. After 6am all bets are off and he’s up and raring to go and will just yell until someone is up, so we take it in turns to get up with him whilst the other has an extra hour or two doze.

He hates naps and will fight them with a vengeance, but often falls asleep at inconvenient times such as in the car seat or pram! 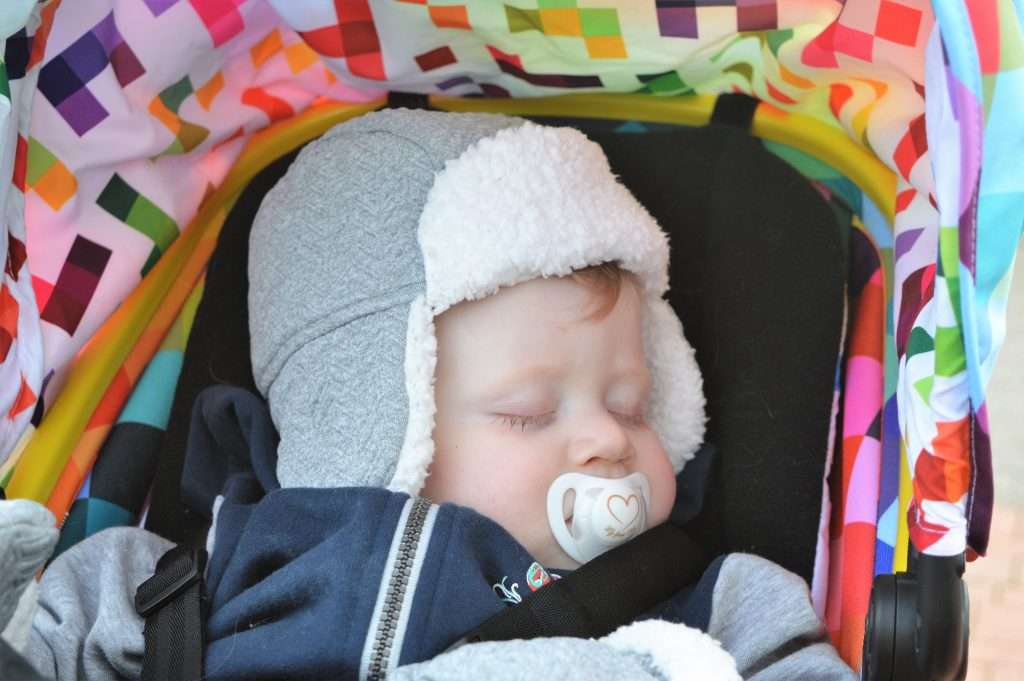 Yeah, he’s still a big baby. But we have been trying not to focus on it at all so haven’t had him weighed / measured since 6 months. I’m trying to just let go of the anxiety I feel over that. I know he is on the 90+ percentile (honestly, I suspect he is at 99% currently!), but he is active and healthy and I need to not worry.

A quick update about me. I’m in Cognitive Behaviour Therapy (CBT) for my post-natal anxiety and I do think it is helping – actually more than I thought it would. I’ve been doing it for about 10 weeks now and feel like I’m making great progress. I’m still on the waiting list for 1 on 1 trauma therapy after my emergency c-section and hospital stay. This has been dragging on a while, but the NHS does not have many specialists in the mental health area. I have a support group and I talk to others which helps. My autoimmune is being a bit of a pain in the butt but we’re keeping an eye on it and my husband has started the referral process for a vasectomy. It’s been a bit of a hard thing to get my head around – that this is the only baby experience I will have, but all the medical professionals agree that a second pregnancy could be life threatening. I knew this from the start – even before I managed to get pregnant, so it’s not a shock to us, but there is a finality to moving forward with the procedure. I was an only child and there’s a 16 year gap between my husband and his only sibling, so we both know what it’s like to grow up as a small family. I think we’ll be fine just the three of us – but adoption or fostering is always an option for the future if we decided to have a bigger family.

My 9 month maternity leave has just finished, but since I have been self-employed for 10 years, I’m not under any pressure to go back to work full time and can do a lot of things from home. With my mental and physical health the way it is, I’m not ready to go back to work full time, but grandma is taking the baby 2 days a week for me to proceed with a work-related qualification I’m currently studying for and catch up with the work I can from home. I never wanted to be a full stay at home mum and always wanted to continue with my business endeavors, but for now, my husband (who manages the business full time in my absence) is holding down the fort amazingly. 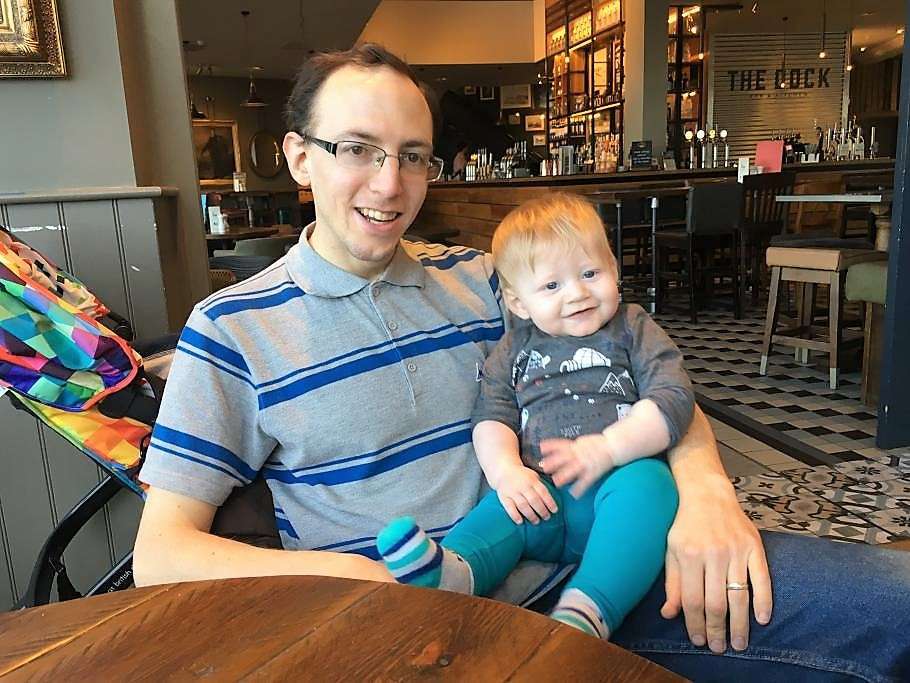 The next update will be at 12 months and I really hope you’re enjoying watching his progress. Let me know of any progress your little ones have made lately, whatever their age! 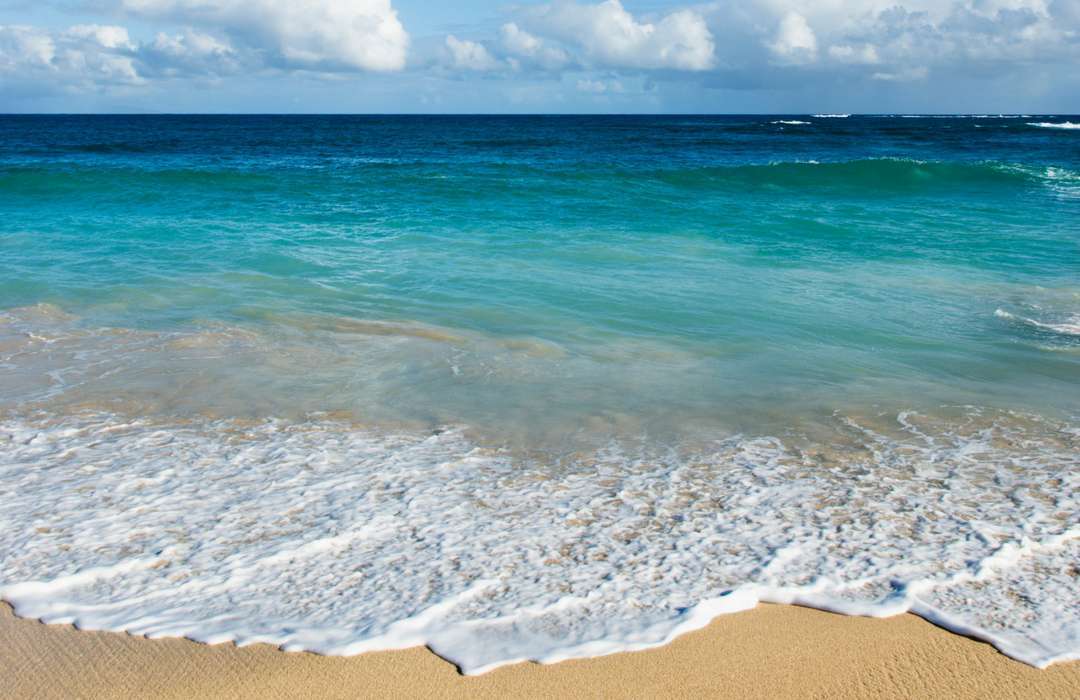 Make a splash with Simply Beach 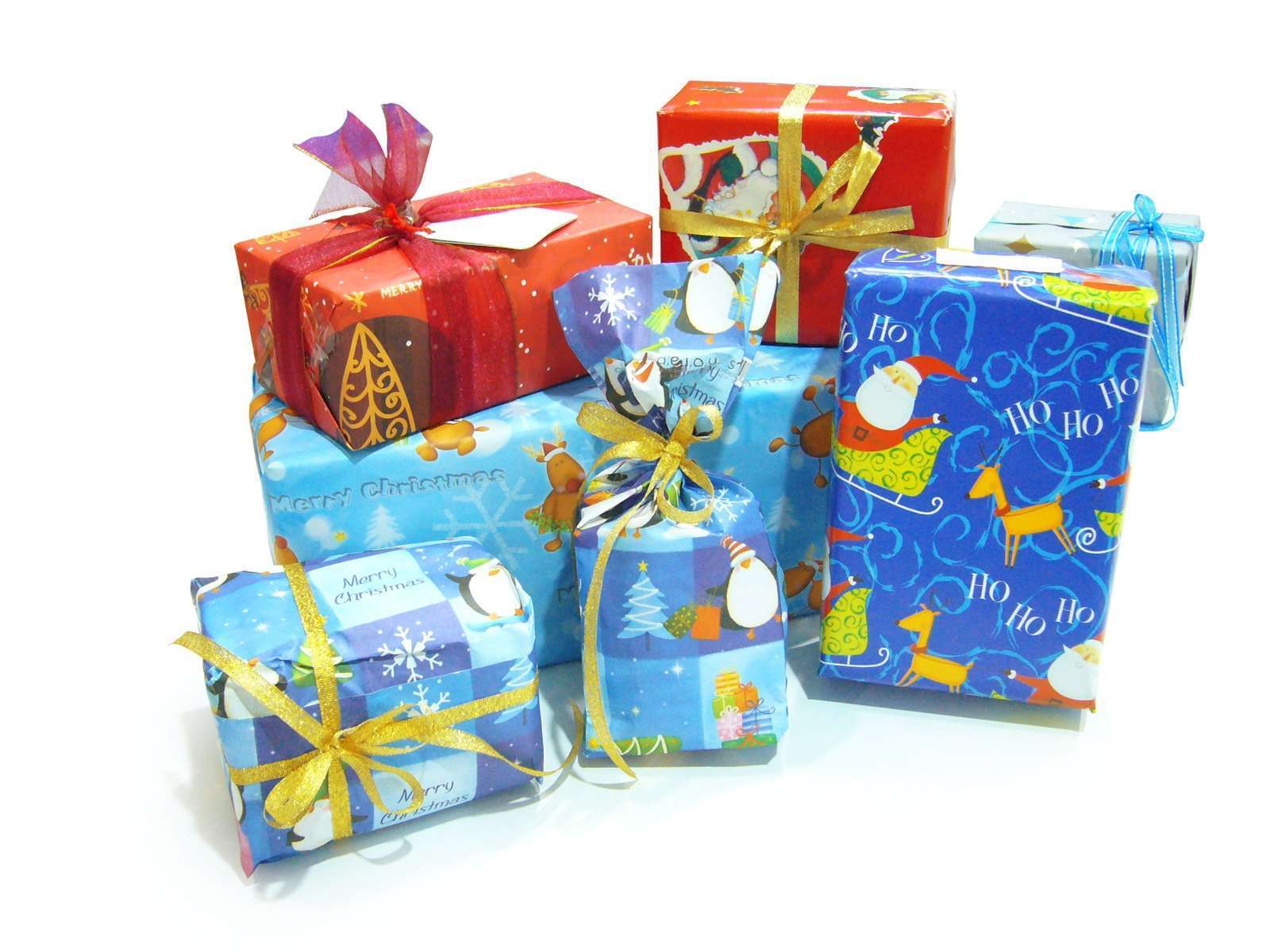 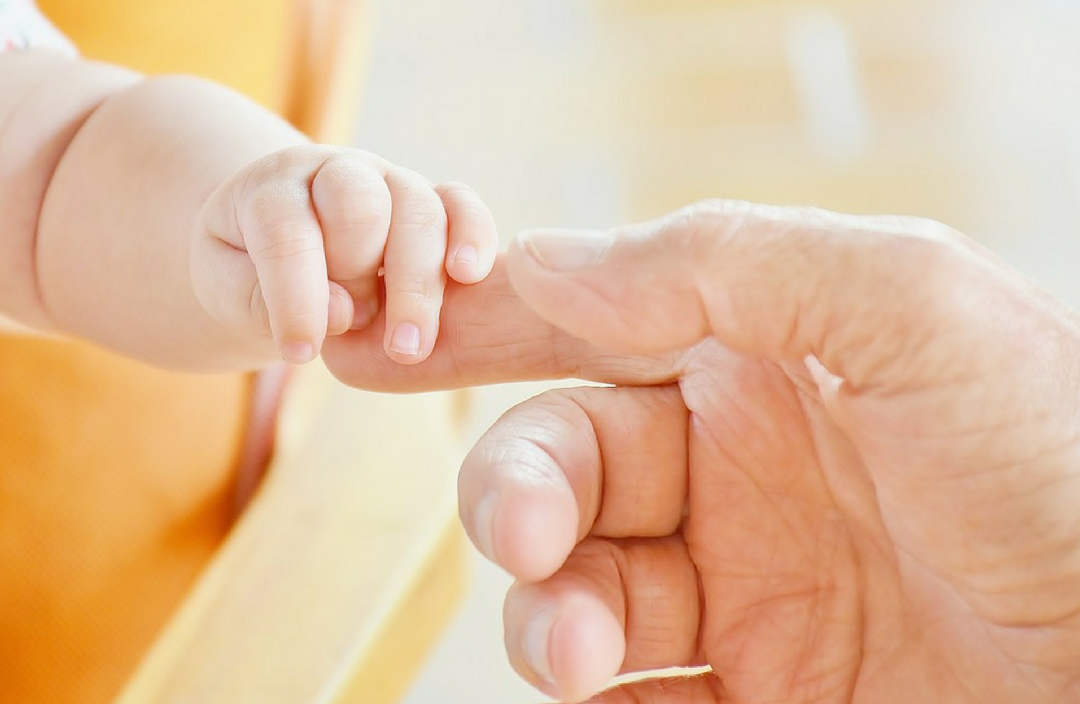 5 Ways to Stop the Spread of a Cold