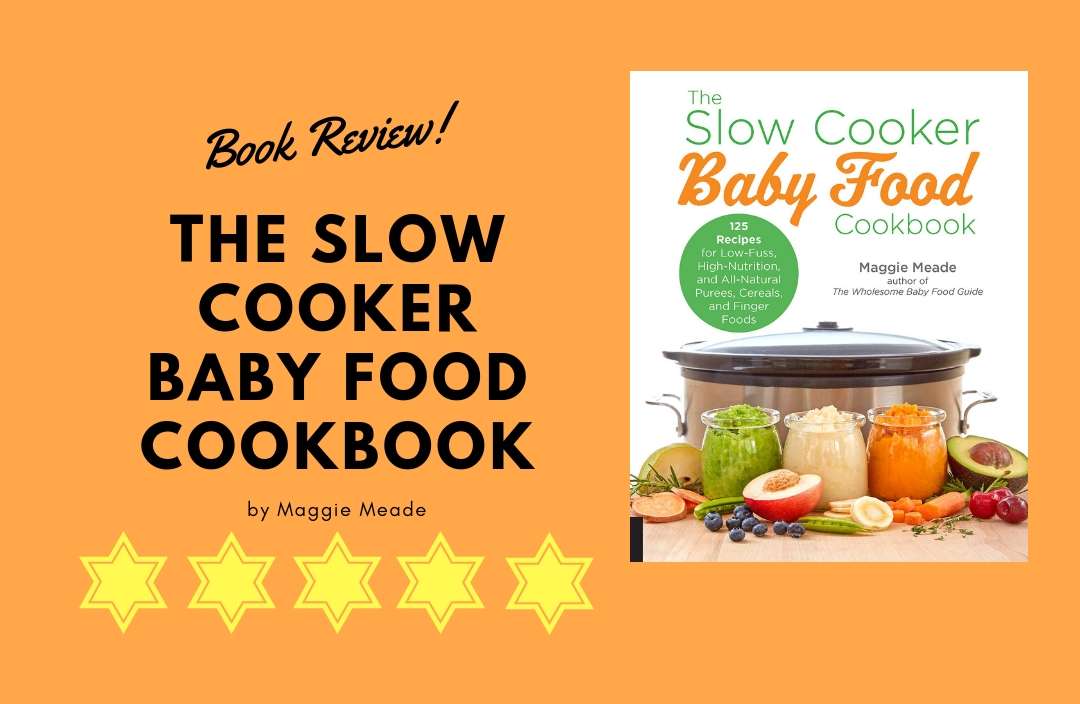 The Slow Cooker Baby Food Cookbook is available now on Kindle or can be pre-ordered in Paperback for a November 1st 2018 release on Amazon and “shows you how to make your own baby food from natural, safe ingredients with flavors you know your baby will love.” As a somewhat new, overwhelmed mum who’s just been working my way through the weaning process over the last year, I have to be honest – I never really thought about using my slow cooker to make baby food.  With so many slow cookers now available and prices starting from just £20, there’s really no reason not to have one in the kitchen. 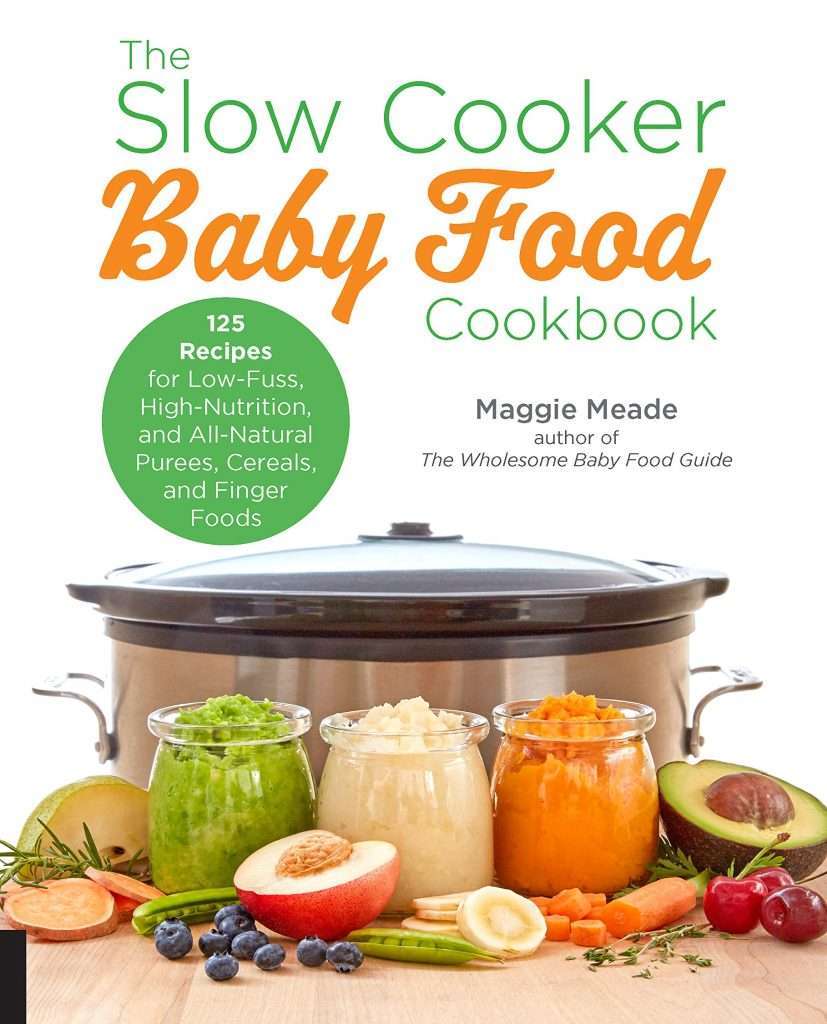 Starting out with some explanations of why you should slow cook (it’s easy!) and how (buy a slow cooker), it progresses through some recipes for home cooked pureed food (stage one) and meals (stage two) that absolutely anyone could make, even me! If someone was to ask me what’s the one small appliance I’d recommend to others, it would be my slow cooker as I use it for slow cooking stews and joints of meat all the time, but I’ll admit, I hadn’t made any pureed food before reading this book. Instead, I opted to buy jars and pouches which ultimately work out a lot more expensive than making your own. I am pleased to announce that I’ve now gained some confidence in making my own jars (which I still use for dessert even though my son is on stage two foods now), plus I’m going to be using the apple puree recipe for my apple sauce at Christmas dinner.

The author of The Slow Cooker Baby Food Cookbook, Maggie Meade, is not British and I can get a little bit frazzled by American cookery books so I was a little concerned that it might not translate to a British reader. Luckily I think that most health organizations world wide now align on their advice, and by following the American Academy of Pediatrics, the NHS advice – such as to move from milk to more solid food starting at 6 months – is followed as well. For my British readers, I would definitely say to have a chat with your health visitor who should make a weaning visit with you around the 3-4 month mark. They do this early on to make sure you have all the information you need to make the right decisions for your child between 4-6 months and onwards, but after reading this book I am happy to recommend it to readers worldwide and feel confident that it follows the medical advice I was given.

The Slow Cooker Baby Food Cookbook has a good section on the basics of weaning, such as how to introduce different foods at what ages, how to check for allergies, what signs to use to see if your child is ready to start solids, spoon feeding or baby led weaning and so on, but the main reason I wanted to read it was for the recipes.

The recipes start off very simple, with one dish meals such as slow cooker apples, easy apricots and blueberry puree. Secondary stage one foods include recipes that have a fruit and vegetable combination, so you can start experimenting with different flavours and really find out what your baby enjoys. This included some combinations I wouldn’t personally have thought to mix, such as Black Beans and Apples, Butternut Squash with Peaches and Sweet Potatoes with Spiced pears. As we progress through the book the recipes will add a bit of spice such as cinnamon and vanilla which will increase the flavours your baby experiences. 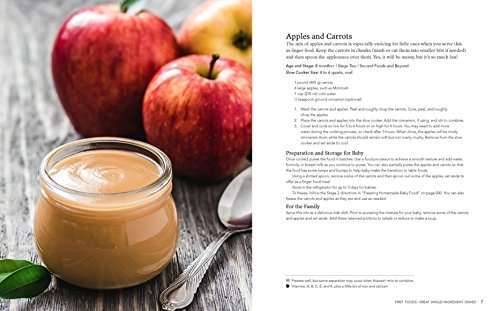 Stage two foods are things that everyone can eat and for little ones who can start using their fingers to pick up more solid foods, introducing new textures as well as a lot more flavour. This includes awide variety of meat, vegetables and fruit and quite a bit of spice and herbs. No plain boiled chicken here – everything sounds delicious and I would be happy to try every recipe myself. In fact, I’m going to! I tried the recipe for three-cheese mac and cheese, something I’ve never cooked in a slow cooker before and it was incredibly good, as was the beef stew that I made for my family using this very simple recipe.

Praise the kitchen because this cookbook does not do that incredibly annoying thing of “include 2 cups!” What size is a cup? A cup is not a worldwide standard, so I hate it when cookbooks do that and I’m frantically googling “How much does one cup of bananas weigh?” Why would you even put your bananas in a cup? Anyway, The Slow Cooker Baby Food Cookbook includes both metric and imperial and gives cups and weights – perfect for everyone who has any sort of weighing and measuring devices.

I love the fact that preparation and storage sections are included for every single recipe, letting you know how long it can be kept in the fridge or freezer and it also includes advice such as “Don’t be surprised if you see little bits of peach skin in your baby’s diaper” and helpful pointers over which recipes will help with constipation. Now, usually you wouldn’t combine poop and recipes, but let’s face it, as parents working through the hazard of weaning, poop is going to become a hot topic and it’s good to have an idea of what’s normal and what’s not. I’m sure I’m not the first mum to freak out when I found some undigested sweetcorn for example!

Finally, each recipe has a “For the family” section which gives helpful ideas for what you can do with it for the rest of the family, such as how to convert your puree into a jam, side dish or sauce for the family meat.

I’ll admit, baby food doesn’t look that appealing to me. It’s just weird coloured oddly textured mash and luckily, it always tastes way better than it looks. That being said, the photography in The Slow Cooker Baby Food Cookbook is excellent. Photography is important to me with a cookbook, as I usually order in a physical edition and want to be inspired and titillated by the images. I need to be motivated, and an image can do that. An image of baby food isn’t hugely motivating, but there are lots of photos of delicious looking ingredients. The colours pop, the jars and containers used are cute and provide serving and storage ideas in themselves and the background accompaniment is spot on. I love the brightly coloured title pages which match perfectly the theme of happy baby, happy family and there’s a few photos of appropriately messy babies which portray the realism of weaning – food everywhere.

Here’s one of my son for solidarity. 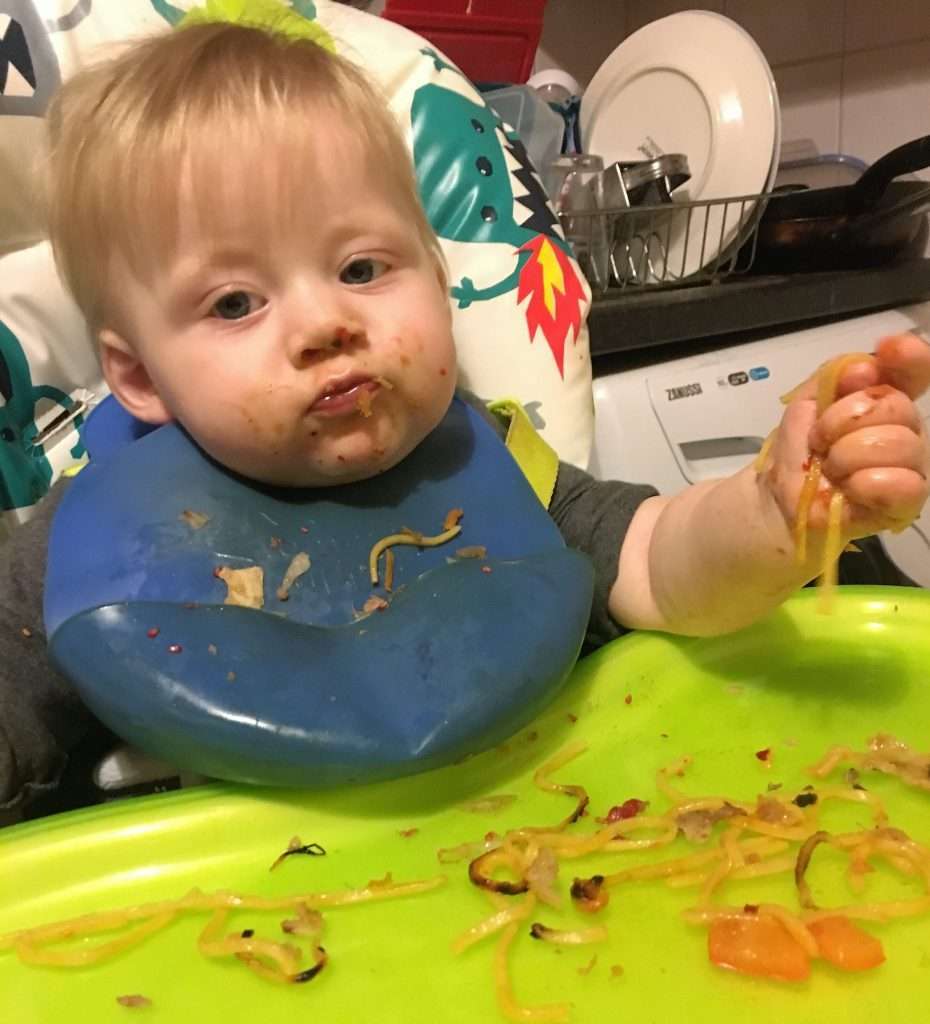 I’m definitely going to be using this cookbook on a regular basis and it’s given me some great ideas. I’d recommend it to any mums or dads out there who would prefer to make home made food rather than jars and ready meals, but don’t want to spend hours slaving in the kitchen for it. It’s for anyone who wants to cook, but needs simple and efficient meals that don’t require a culinary degree to perfect. Five stars from me!

What do you think? Do you make your own baby food and have you cooked it in your slow cooker before?

I’d like to thank Quarto Publishing Group and the Author, Maggie Meade, for providing me with a review copy of the Slow Cooker Baby Food Cookbook through Netgalley. 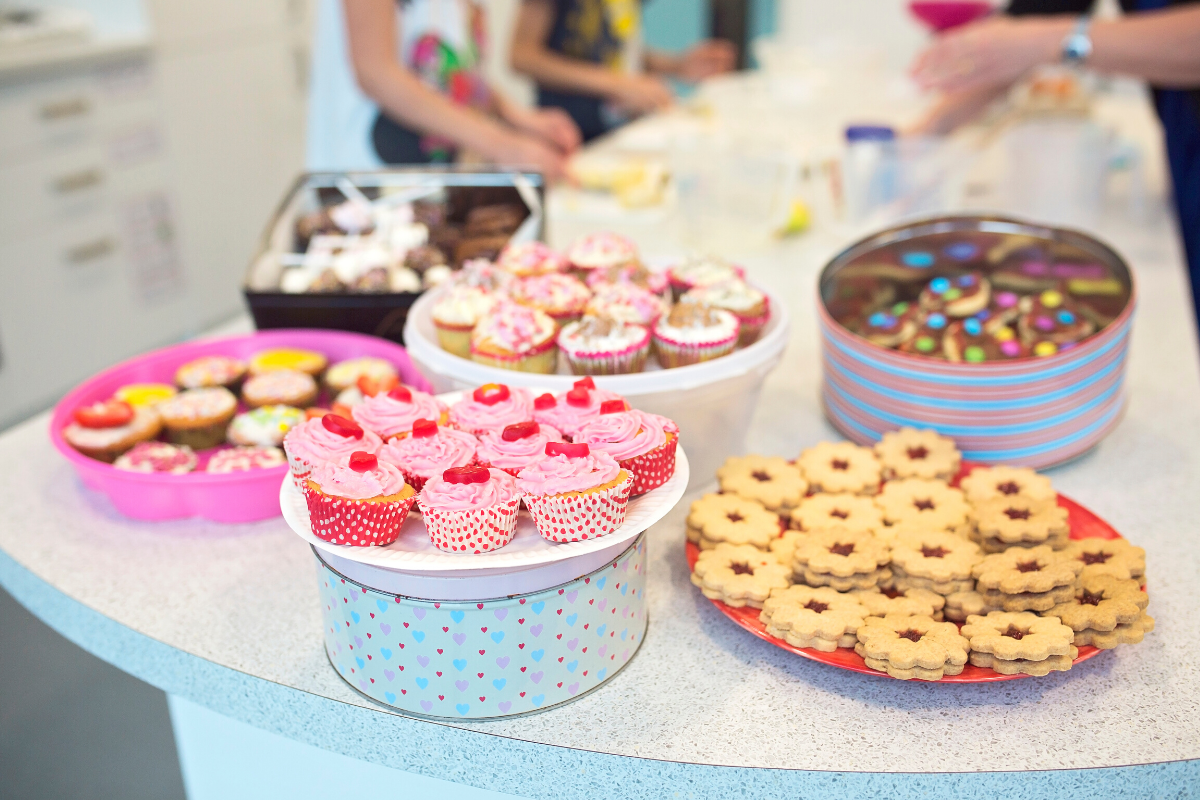 Should home made cakes at School Events and bake sales be banned? 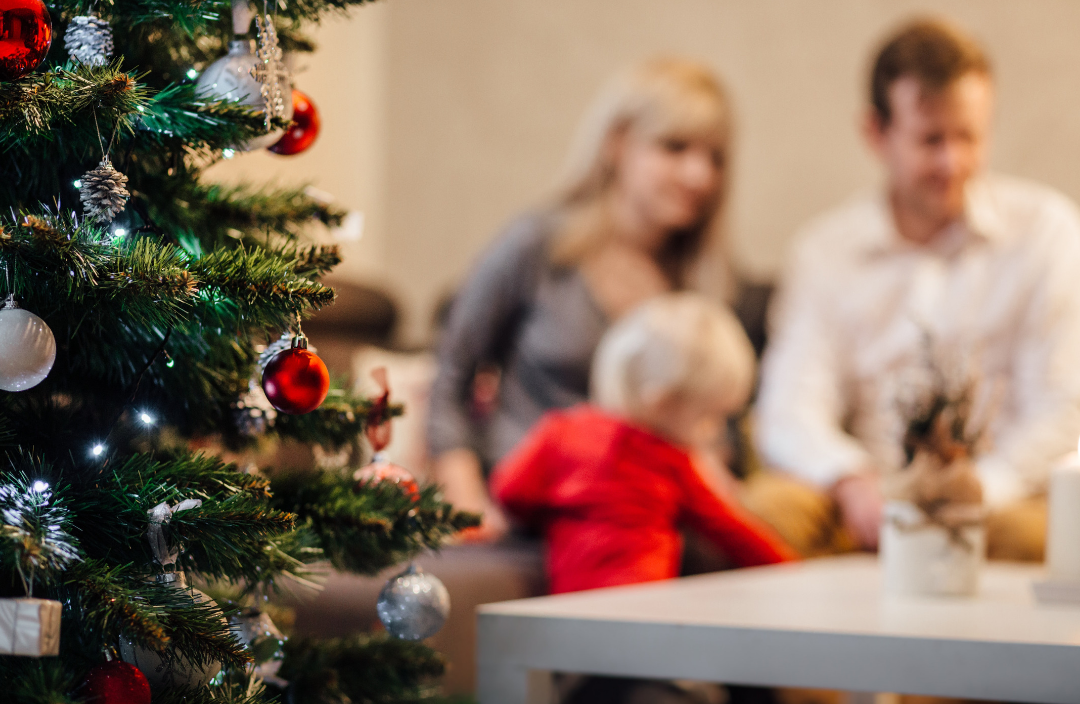 Preparing to survive the holidays with a baby 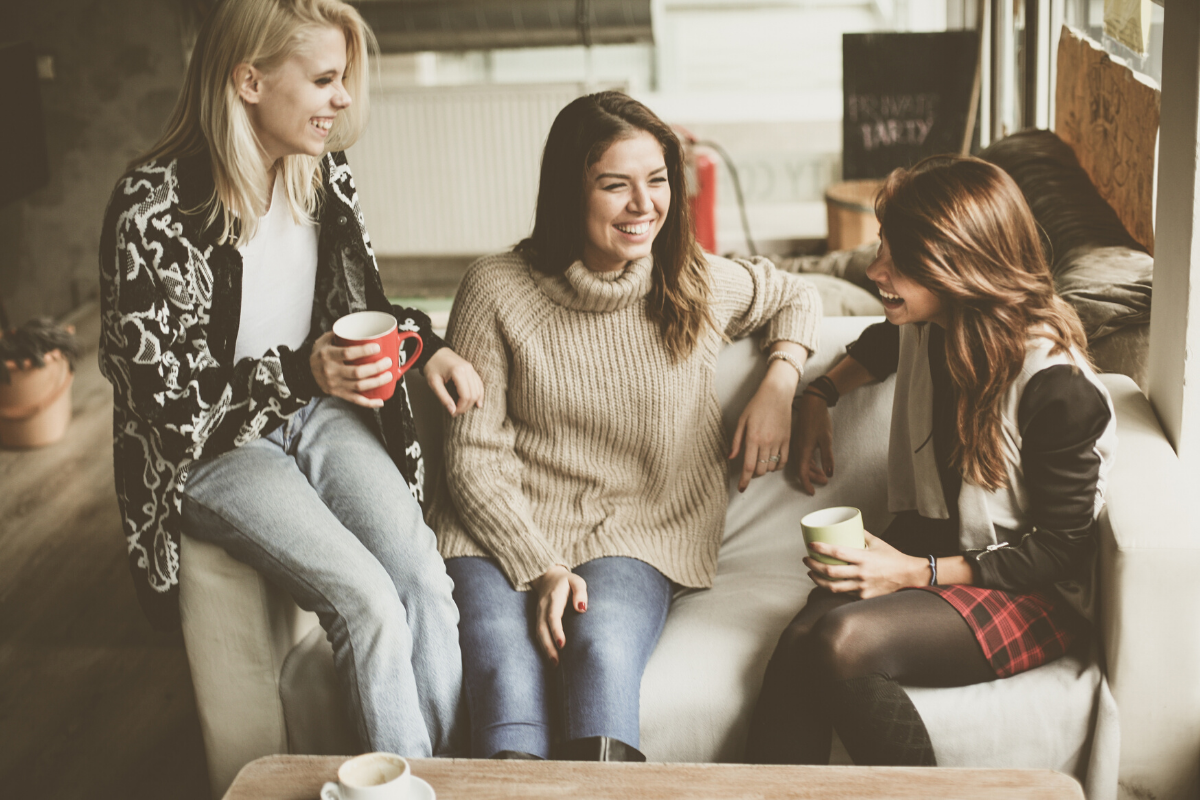 How to make new friends (as an adult)